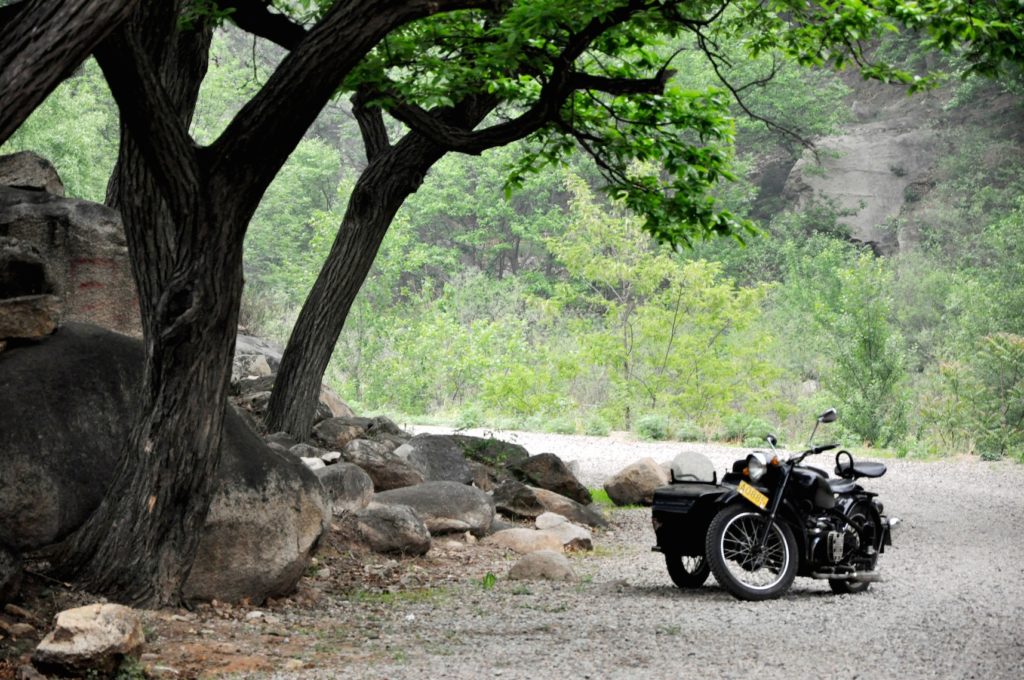 Biking out to Liyuan Library — one of the world’s most beautiful libraries. Great journey into the deep Beijing countryside. Also, books…
In the midst of deep concentration at work (looking at memes), I stumbled upon a collection of beautiful libraries around the world, one of which claimed to be close to Beijing. A few quick searches yielded architecture and design websites, but the local expat rags seemed completely clueless: no blogs, no photos, not even any hipsters claiming to have been there before it was cool. Dian Ping hosted reviews and unnecessarily vague directions — directions that included “drive along the windy road until you feel like you have gone too far”.

Self-assured (and perhaps overconfident) with my sense of direction, bags were packed, and my boyfriend and I hopped on my Changjiang 750 sidecar and set off for Huairou District (怀柔区), 50km northeast of downtown Beijing, searching for the Liyuan Library (梨园图书馆) in the village of Jiaojiehe.

After following Jingmi Road (京密路 — G101) from the 4th Ring all the way to Huairou’s town center, we exited at the G101 at Datuncun Bridge (大屯村桥) and turn left onto the G111, which becomes Jingjia Road (京加路). Staying on this road, you know you’re on the right track if you keep seeing the red G111 on the road signs. About 50 kilometers from the 4th Ring and about five minutes after getting onto the G111, we turned left onto Fanqi Road (范崎路), a major intersection.

Once on Fanqi Road, we rode the highway all the way to Jiaojiehe, the “town” the library is in. 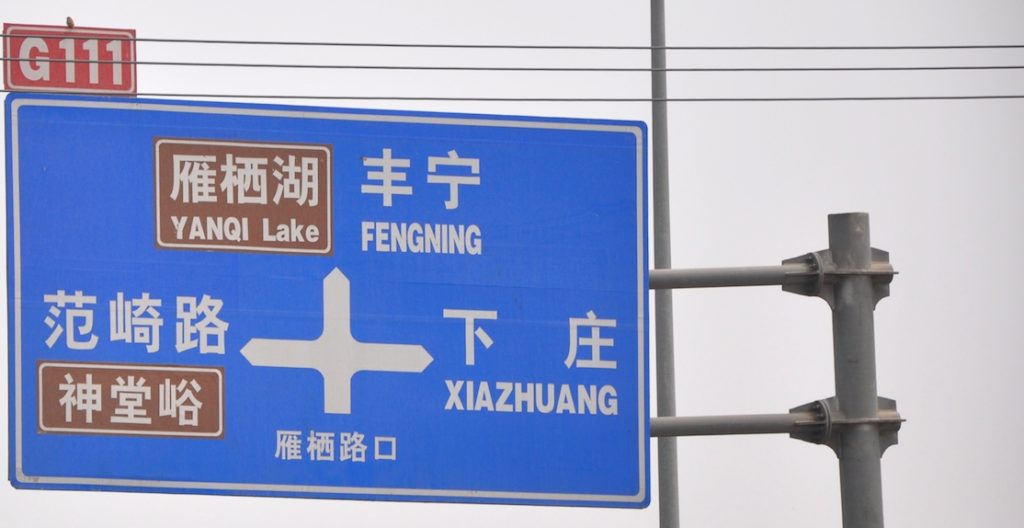 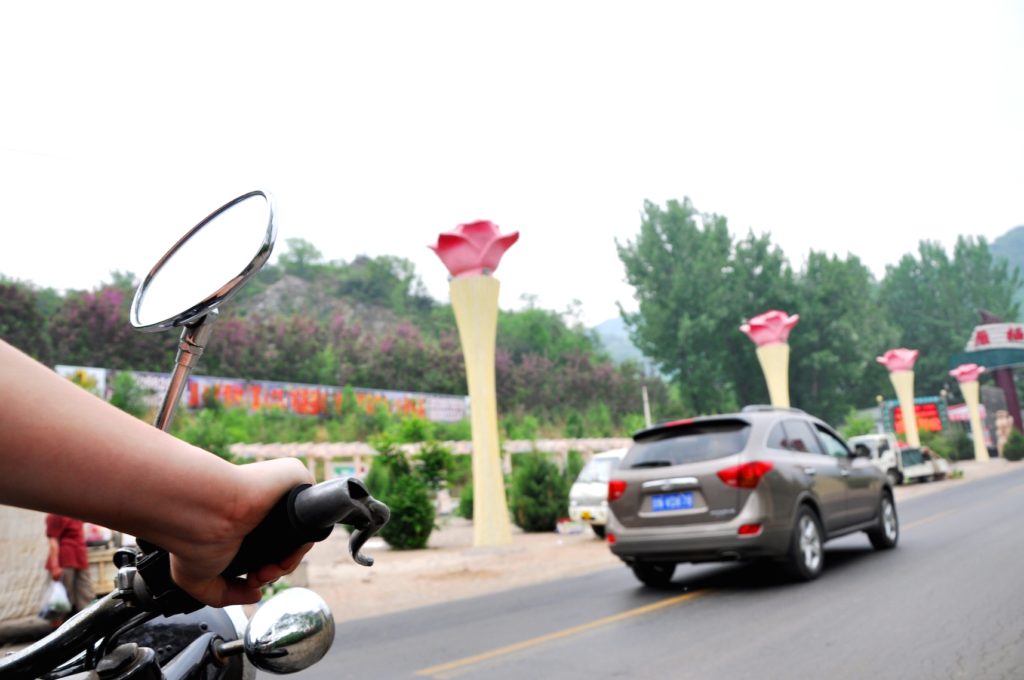 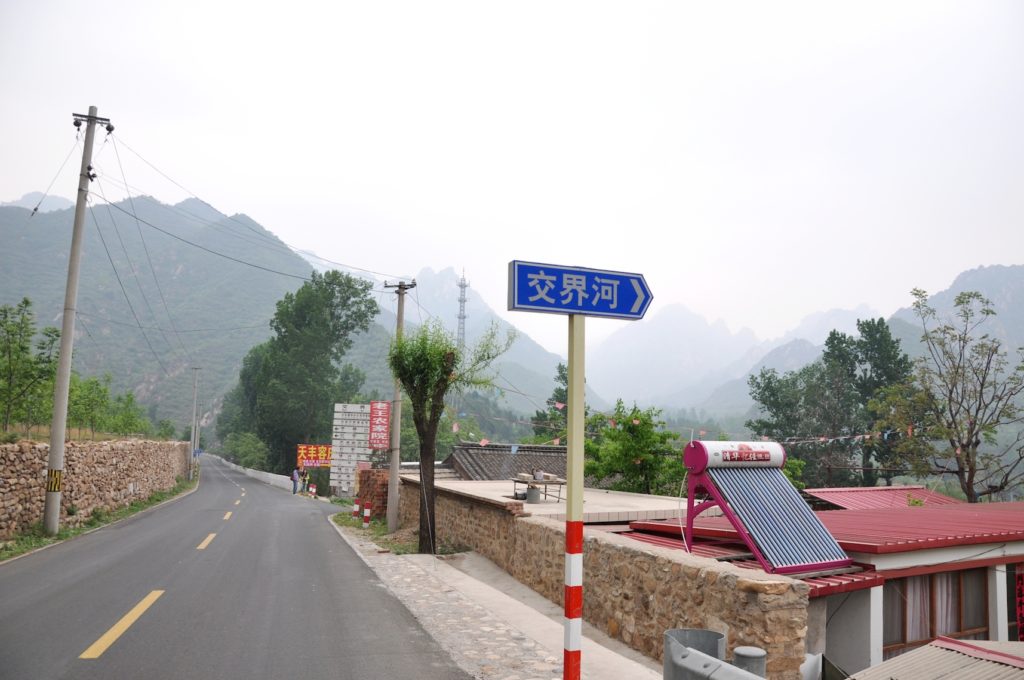 There was some serious construction along Fanqi Road and all along the banks of the Beitaishang Reservoir (北台上水库). Perhaps by the time you drive through, there will be villas all made out of ticky-tacky and wealthy Beijing vacationers, but, for now, it’s a Mad Max-style wasteland. 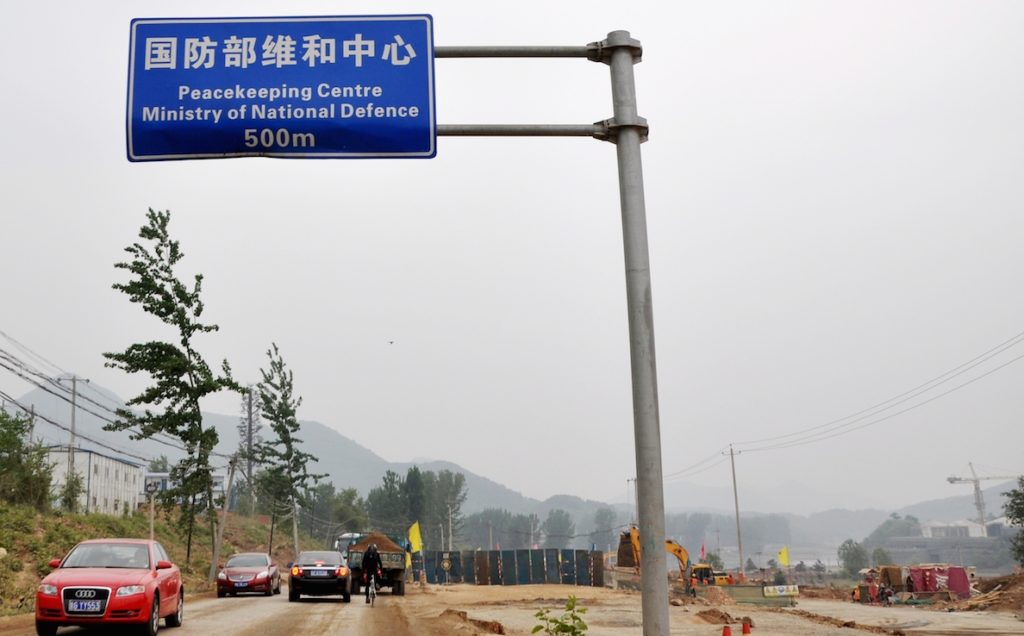 Around 8km from there and the construction clears up; we found ourselves at the base of a mountain, and the scenery suddenly became peaceful, green, and picturesque. We kept going straight ahead and started noticing copious amounts of horse crap on the roads, children riding dune buggies down the highway and a sign for “CS” paintball or laser tag at every turn. We were looking for a place to stay and noticed that all of the courtyard houses along the road were the makeshift guesthouses from people who had turned their homes into cheap hotels to take advantage of the vacationers. These places charge between 25 and 100rmb for a night and often include home cooked meals.

Within a few kilometers, the peaceful scenery turned hectic and congested with Beijing tourists, hotels, screeching children, hoses all over the roads and quads speeding up and down the mountain. Suddenly we were right smack in the middle of a weekend resort town. 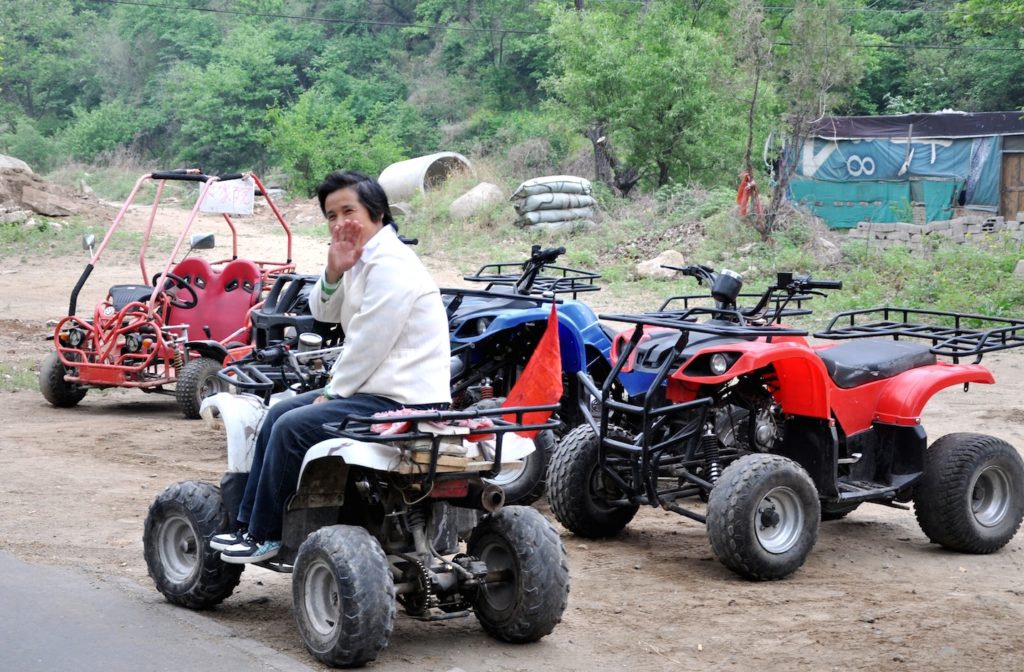 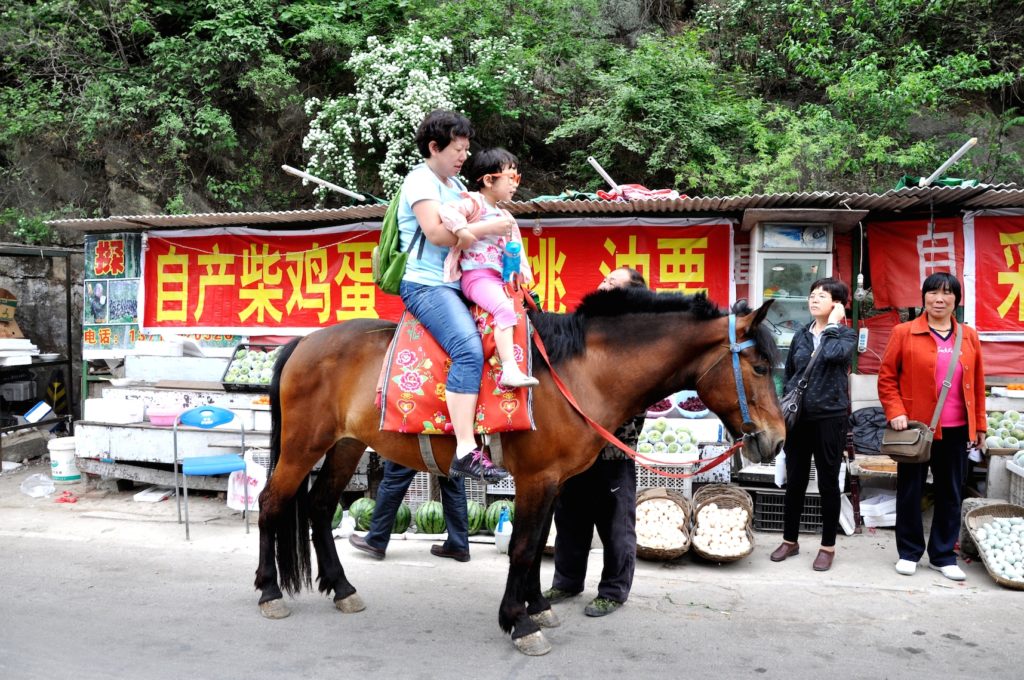 Deciding not to stop, we pushed my motorcycle on, and reluctantly she chugged in first gear up and over the mountains of the Shentangyu Natural Scenic Area (神堂峪自然风景区). The road is extremely windy and steep, and it’s one lane all the way to the top. There are guest houses all the way, including one which we looked at called Delicacy Valley Cottage (馋人山谷农家院) which was 100rmb for the night.

After cruising in neutral all the way down the other side of the mountain, just when we were starting to worry about the sketchy directions to this mysterious town and even more mysterious library, we finally saw it. The little blue sign to Jiaojiehe (交界河) on the side of the road, dianping.com’s major travel insight.

The tiny sign, with no English or pinyin, was the only reassurance that we were heading in the right direction, leading to cheers when it was finally spotted. 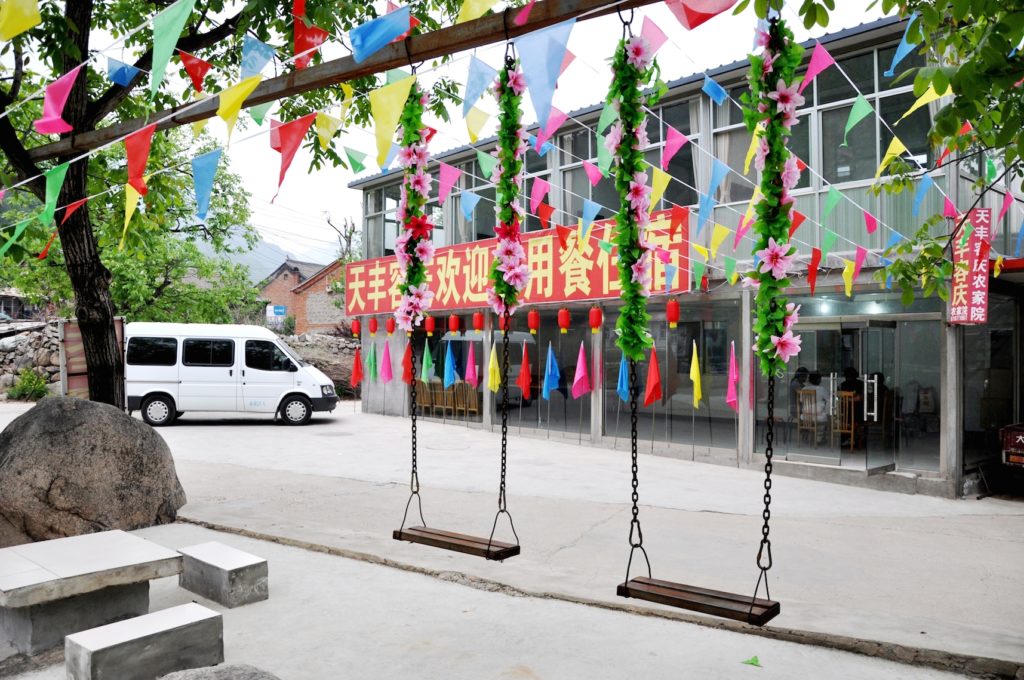 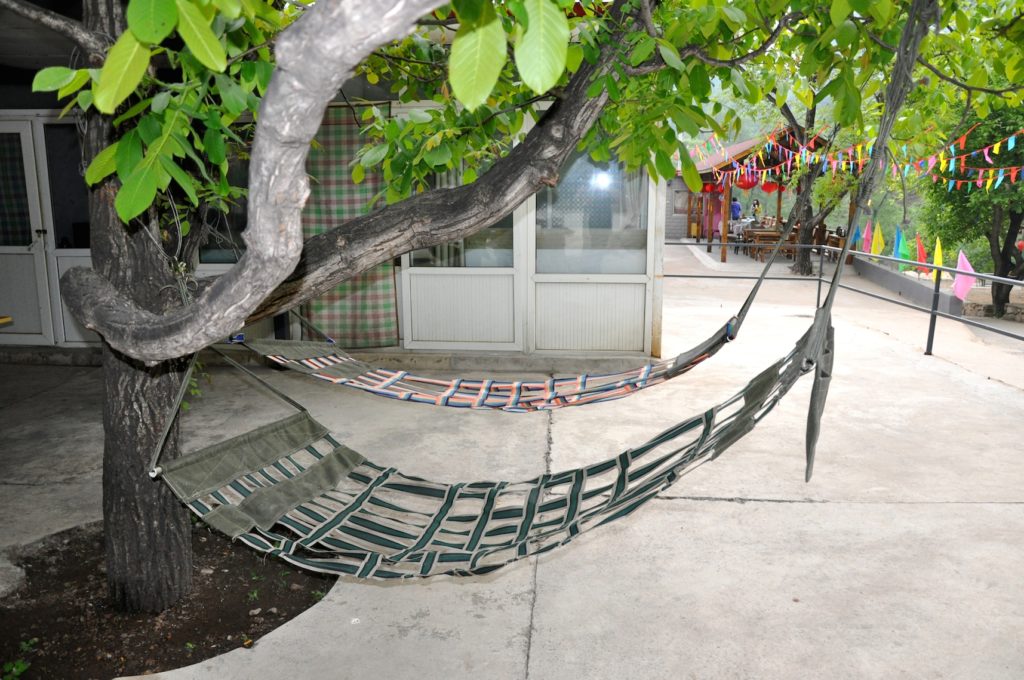 We exited the Fanqi highway and cruised around the small town before stopping at the Tianfeng Rongqing Farm House (天丰容庆农家院). We stopped here mostly because it had hammocks (and hammocks are awesome) but also because it was the only hotel in the village. The place was friendly, clean and — at 80rmb a night per person — a bargain. The female owner made us a great dinner of standard Chinese offerings and gave us a room with a view, flat screen TV and our own bathroom. 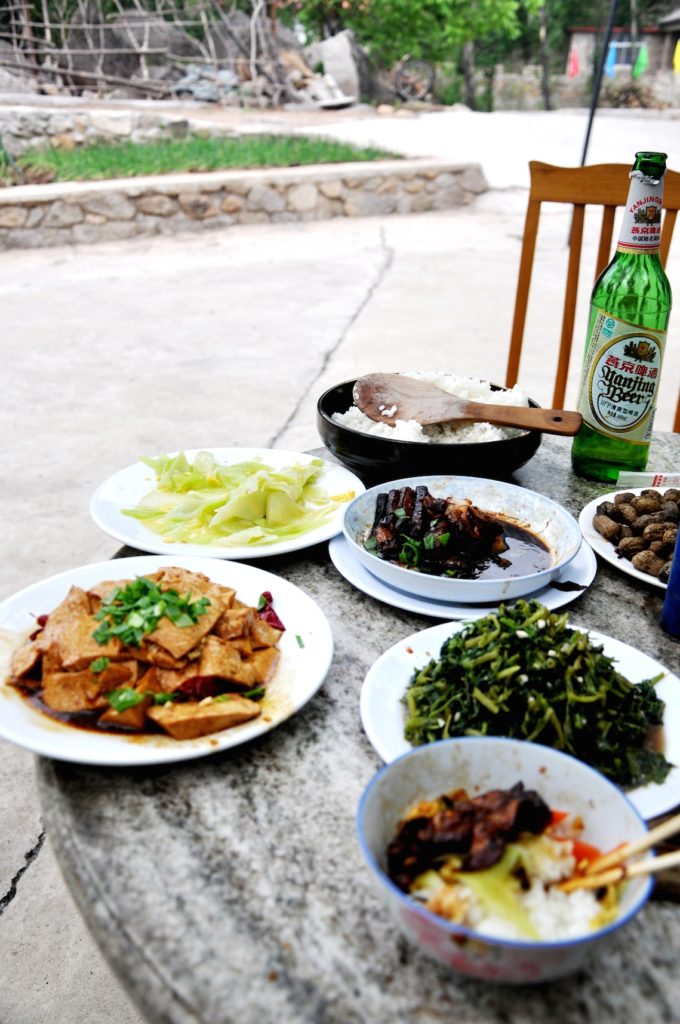 The next morning, we woke up at 5am; I wish I could say it was because we were so excited about seeing the library, but truthfully the bed was like sleeping on concrete — concrete made of knives and children’s tears. (If you have the space for a spongy bed roll, I recommend packing one.) We went for a walk, ate our breakfast of bing and eggs, paid 245rmb for two people including meals and cold beer, setting off in the direction of the library. We didn’t have to go far before the road turned from paved into loose stones. We parked then walked around the corner to see the library, a literary oasis in the middle of nowhere. 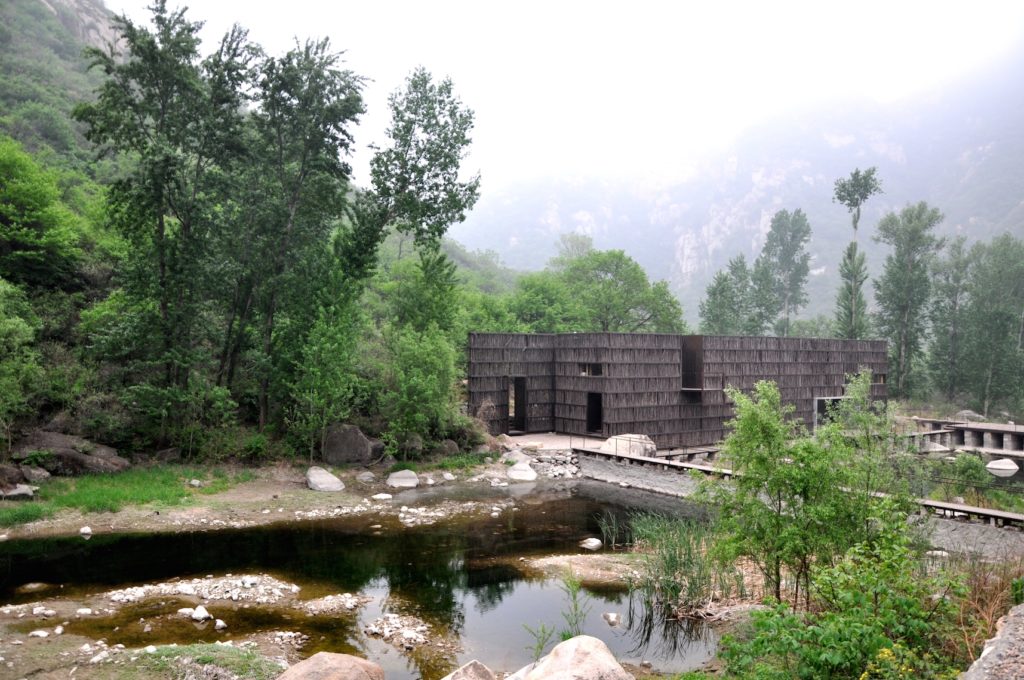 We were stupidly early, so we sat around and waited for a maintenance guy and little old lady who came and opened the doors at 8:30am. It was maybe a little bit run down after several years of being traipsed though by tourists, but amazing nonetheless. 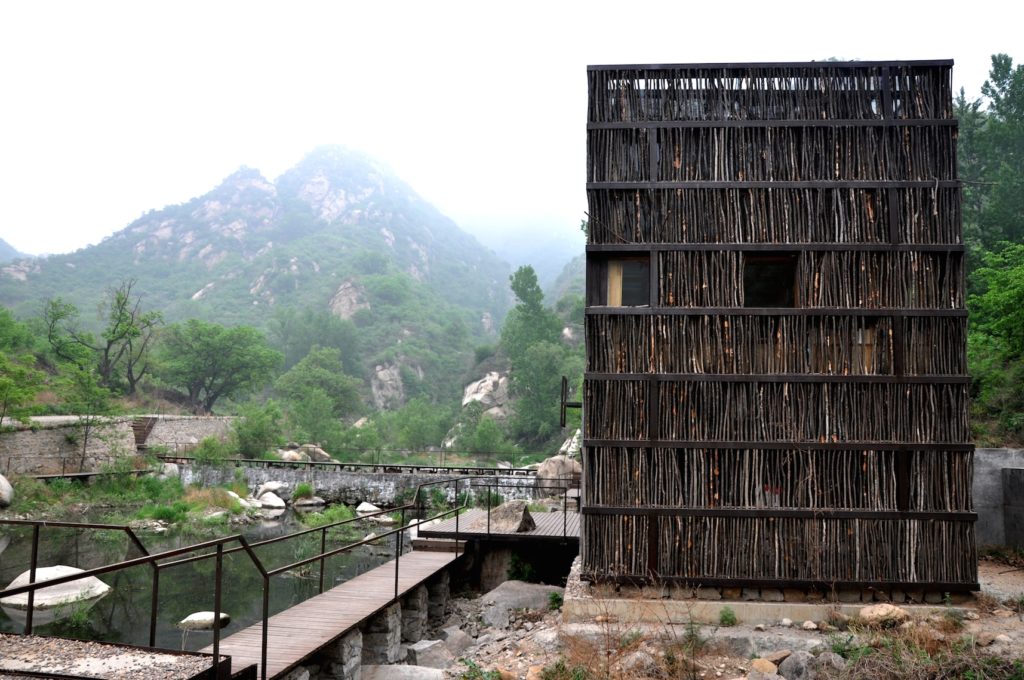 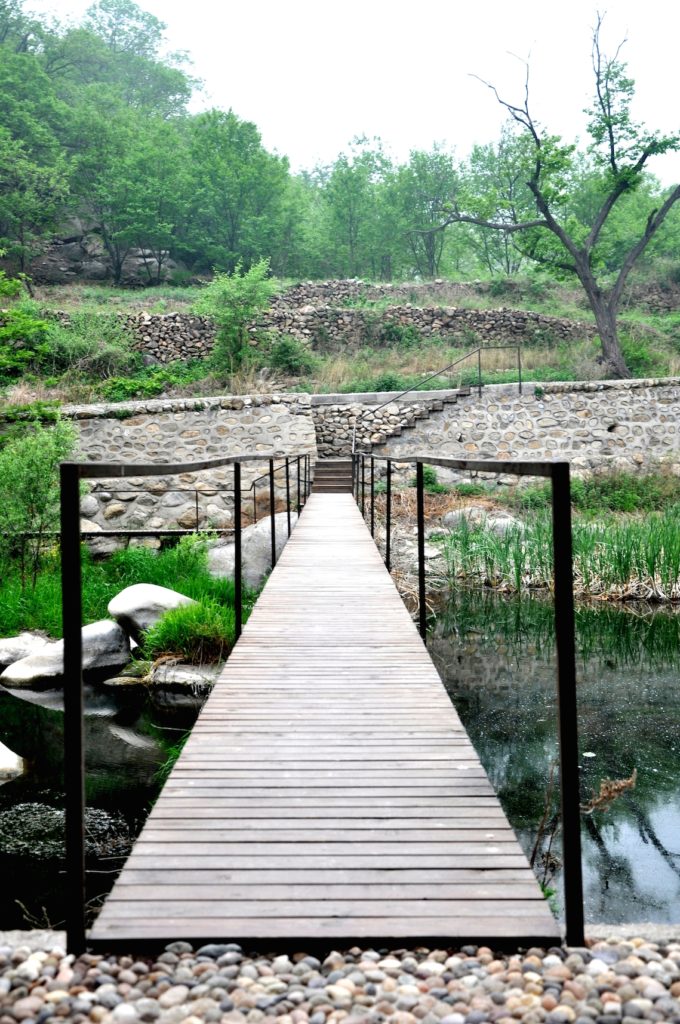 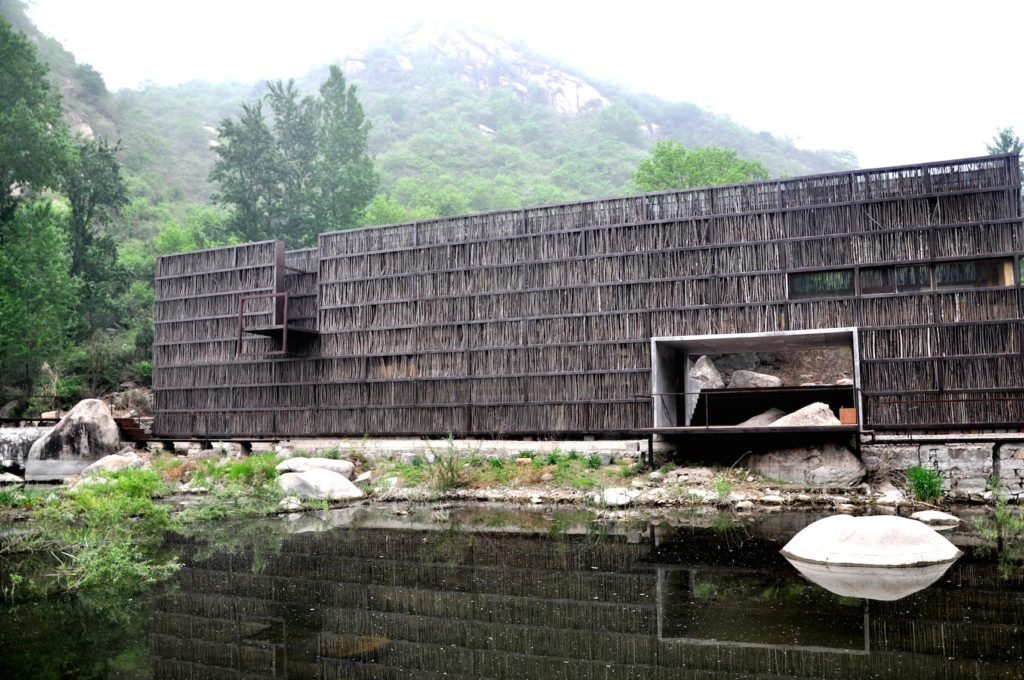 The library is free to hang out in and read, and they have a box for cash donations. But, they also really appreciate books. If you are going to make the trip, a nice gesture would be to take a few second hand books in any language to give them as a thank you for existing. The place is — quite simply — magical, romantic and totally unique. I couldn’t believe I had never heard of it before and I don’t understand why it just sits there, practically unused for anything other than tourists with giant cameras to pose their mistresses in front of. 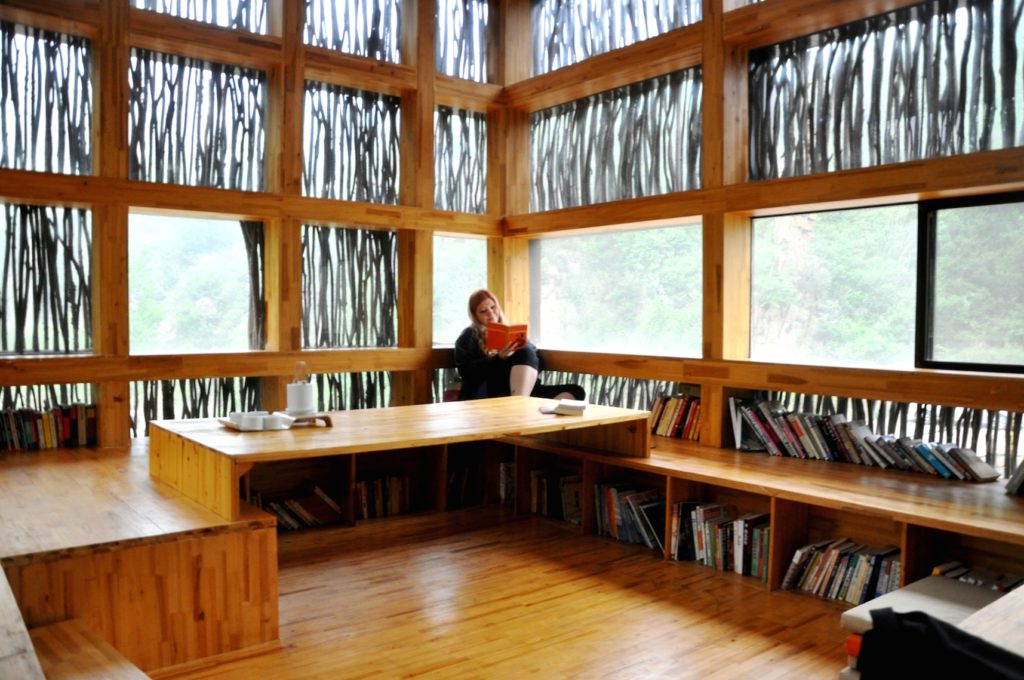 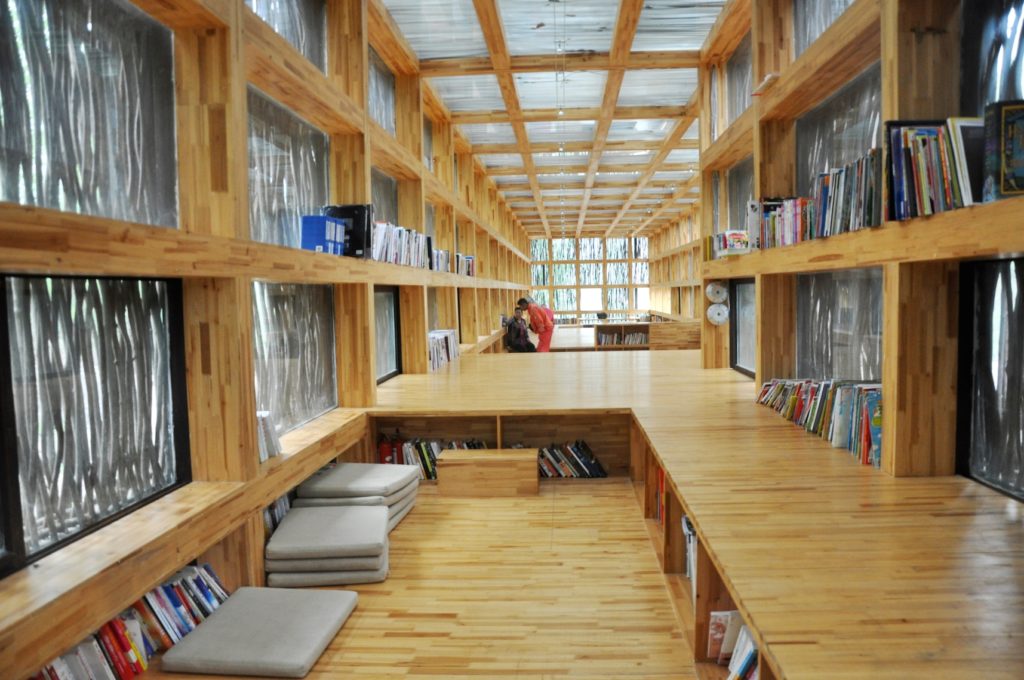 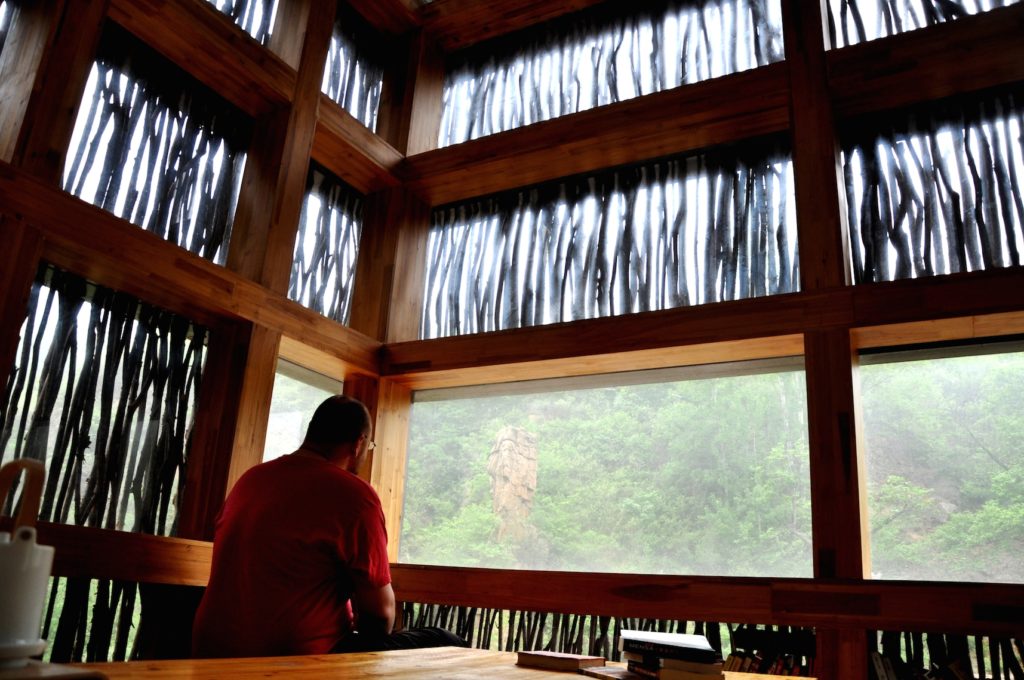 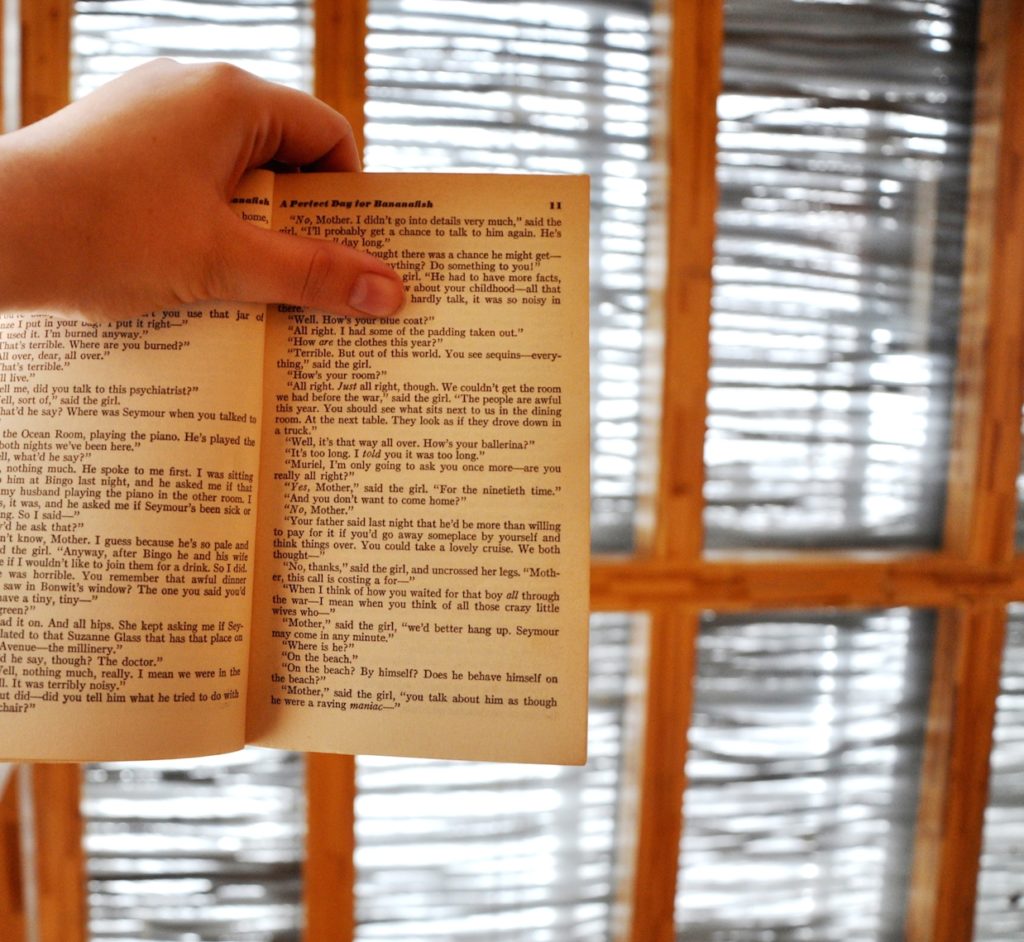 Other than the library and some beautiful hiking, there is not much to do in the village of Jiaojiehe. So, either take a lot to read or head back to the more touristy parts of Hairou for some adventure sports, horse riding, paintball, fishing, or some ATV off-roading.

I recommend exploring this area by car or bike, you get to see so much and stop whenever you want; you can rent cars in Beijing without a driver from Shouqi if you have a license. You can get a driver with a car to take you for about 500rmb per day if you find one on the street, or you can talk to Tour Beijing. The trip by car should take less than 3 hours. You can rent Changjiang 750cc Sidecars like mine from some shops around Beijing such as Sidecar Solution but I don’t recommend it if you aren’t used to driving them.

You can get to Jiaojiehe by bus as well. Take the 916 bus from Dongzhimen (东直门) to the Huairou bus Station (怀柔汽车站) this takes about two hours. Then get on the 936 bus from Yingbinlu Beikou (迎宾路北口) to Jiaojiehe (交界河). The 936 is old and slow and negotiating those windy roads takes a couple of hours. A better option might be the bus to Huairou then negotiate with a diver from there to take you to Jiaojiehe.

This article was originally written, by me, for Smart Beijing. Sadly their website is no longer operational. The cache page still exists here.