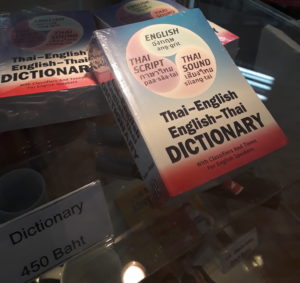 After almost 16 years (give or take a year here or there) in China, speaking Mandarin every day, learning the tones, the characters, the bad words, the Beijing slang, and generally being pretty Chinese, I have had to turn off that part of my brain. Every day, I have to try to silence the little part of me that is desperate to communicate with locals in Chinese. The language I have spent so long trying to figure out is useless now, but my idiot brain is having a hard time realising that, and when English fails, it automatically wants to use the other language it knows to get the point across. I find myself constructing sentences with taxi drivers here in Bangkok, and while all the key vocabulary is in Thai, the conjunctions, articles, particles, and pronouns all slip out in Chinese before I can stop myself.

Because I knew Thai would be a tricky transition, I enrolled in classes as soon as I got to Bangkok. I have been studying 8 hours a week in real life classes for the past 6 months at Language Express. I really like being a student, it is great fun, and I don’t think I would learn anything without these classes because it is really easy to get away with only speaking English while living in Bangkok. 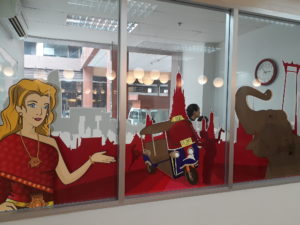 Some people learn Thai without learning how to read and write, but I do not recommend this method. Not being able to read will leave you very limited in your ability to manoeuvre around the country confidently, and to learn new vocabulary. Unlike Chinese with Pinyin, there is no official, standardised system for transliteration of Thai into the Roman alphabet. You will often see a place name written 3 or 4 different ways. My school uses the Paiboon system of phonetics and letters to express (what I feel) is the most accurate pronunciation of Thai. Learning Thai is not as hard as Chinese because you don’t need to memorize 5000+ characters. There are 44 consonants and 32 (ish) vowels, along with a few tone diacritics. The first step is memorising them all, learning their names, the sounds they make, and which consonant group (class) they fall into. The consonant group is really important because it will dictate what tone the word is once the consonant is combined with a vowel. The most basic tones rules are these:

One of the hardest parts of learning Thai writing for me has been trying to remember which consonants go in which groups. There are High-Class, Middle-Class and Low-Class consonants.

The first group of consonants to learn are middle-class. There are only 9 of them. 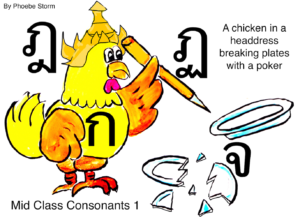 To learn the next group of consonants, I created a slightly more convoluted story and fit all 11 of the high-class consonants into it. The story is a bit silly and childish, but it is super easy for me to remember. I hope it helps you, too! 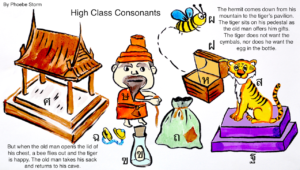 Stay tuned for my next post in which I will tackle the biggest group, the 24 Low Consonants.